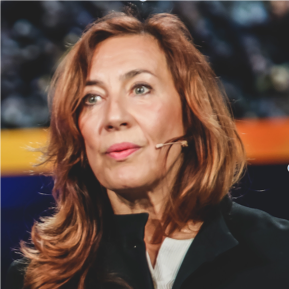 Degree in Pharmacy at the University of Padua, gained 30 years of experience in the pharmaceutical sector by starting his own path in the neuroscience sector, developing and launching in 1992 an innovative line of nutraceuticals based on botanical products in Fidia. Since 1999 she has worked at the multinational Glaxo Welcome as Business Development Senior manager, actively collaborating with the Center of Excellence Neuroscience Research, with the role of Italian Representative of the Center of Excellence at the headquarters in the United Kingdom. Among the founders of the Italian Association for Business Development and Pharmaceutical Licensing (today Italy HLG) of which she was Vice President from 2001 to 2003, also in GSK, she covered the rules in the direction of the Neuroscience and vaccines business units.

In 2009 he left GSK to take charge, as General Manager, of the relaunch of a biotechnology company -IRB Institute for Biotechnological Research. Two years after her entry and after the launch of the success of the products resulting from the research, 7 new patents were filed and the mention from of Il Sole 24 Ore among the 100 excellences of New Made in Italy for innovation was obtained: the “Environment Enterprise Award for the Best Process and Technology” was wont as well as the First Award for the Best Quality and Product Safety of the Business Technology and Nutraceutical Award in 2011. Therefore IRB obtained first place in the Regional Public Competition with the Vegecell research project in collaboration with the CNR of Padua. The company she led was the first and only in Europe to obtain the European authorization of three different ingredients for nutritional supplements (substantial equivalence / novel food) from plant cell cultures.

In 2012, an international leadership recognition of the technological platform developed was obtained by IRB, and she personally followed its acquisition by the Multinational Croda International plc, becoming CEO of the same company until June 2016.

In 2016 she founded Demethra Biotech S.r.l., together with the entrepreneur Mauro Fanin, founder of the project and president of the Cereal Docks Group, an innovative start-up, Italian 100%,  of research, development and production of plant active ingredients from cell cultures for    healthcare, food and personal sectors. Thanks to the CROP® platform, finetuned by herself and her research group, the total abolition of the use of solvents and pesticides in the production of vegetable active ingredients are provided and a huge saving of resources, as soil and water about 1000 times less to the consumption required by traditional crops. For this sustainable approach she obtained in 2017, a loan from MISE and the Veneto Region for research, development and innovation projects of strategic importance for the revival of the competitiveness of the production system which included the forecasted setting of Demethra Biotech Srl capable of generating about 2.5 tons of fermented per day. The project also envisages a close collaboration with CREA, the Ministry of Health and various university institutes for the realization of public / private collaboration projects in the pharmaceutical area.

She is currently president of Planta rei, a green biotech company with a particular focus on enhancing the biodiversity of Italian flora.

She is the inventor of 12 patents, and, for the second term, is Mamber  of the Presidential Committee of Assobiotec – Federchimica and also for Assobiotec, Coordinator of the Communication Group; she is Member  of the Academic Commission of the University of Medical Biotechnology of Modena and as well as  of the Scientific Committee of the Cluster Bioinnova (Biological Cluster Veneto) which, within the INNOPOS project, in close collaboration with University Institutes deals with restocking, after the storm VAIA, in the municipality of the Asiago plateau of native plants at risk of extinction. She has been a member of the working group for the accreditation and evaluation of the Master’s Degree Program in Biotechnology for Food at the Agripolis University of Padua since 2019.

She is currently president of Planta rei, a  green biotech company with a particular focus on enhancing the biodiversity of Italian flora.